What’s the best way to get Philadelphians talking? Ask them about city snow and trash removal. FunTimes Magazine recently engaged the residents of Philadelphia in a survey to find out their contentment with the city’s snow removal and trash collection efforts this winter. 236 Philadelphia residents responded to the survey, with responses covering 40 zip codes.

Breaking It Down By Zip Code

South Philadelphia, zip code 19148, got the highest number of responses for the survey. It was observed that over 70% of the residents were dissatisfied with the snow removal and trash collection this year. Many of them expressed their frustrations in their included comments. “I think the city could have done a much better job with staying on top of the snowstorms by hiring more staff to get it done properly and quickly. The parks are pretty dirty these days and nobody in the city is ever in there cleaning it up, specifically the park by 13th and Oregon that stretches all the way across. I always see trash and bottles and everything else in there, and the grass is disgusting as well. When is that stuff going to be fixed and brought back to life to look better than ever? The city needs to do better on all of these things immediately” one resident stated.  Another remarked “Trash pick up is inconsistent ALWAYS and the street is left completely trashed after. Especially the 1800 block of South Camac St”. One resident also added, “Our street is always forgotten, we are not Center City”. 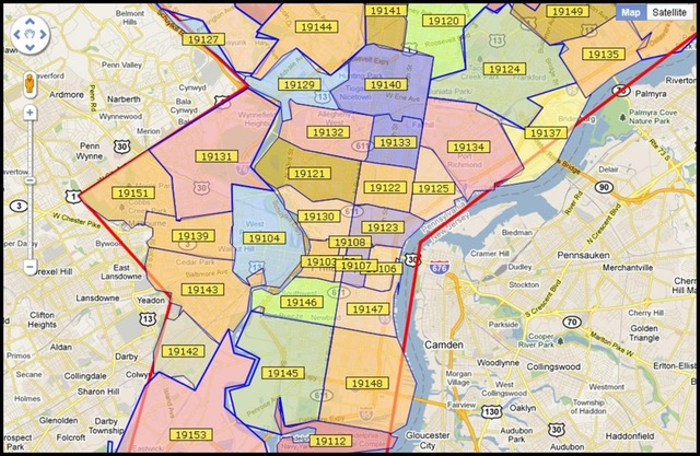 26.3% of the survey responses came from zip codes containing areas with with lower-income communities such as Tioga-Nicetown, Fairhill, Hunting Park, and Allegheny West. In general, all of these communities were dissatisfied with the trash collection. Some people complained of waiting three, even four weeks for the trash to be collected.

One observer pointed out a disparity in trash removal between these neighborhoods and more prosperous areas. “In my neighborhood in North Philly, there were several Mondays in a row that trash was not picked up. One was a holiday, and the other two were weather-related. That part is understandable.  But not coming at all for three weeks, until the neighborhood trash is literally piled 8 feet high in a mound, is ridiculous. Then when [sanitation workers] did come,  [they] only took part of it and made a stink because the garbage was all in a big pile in front of an empty lot...Maybe that is because parking is also tight, and we cannot have a months [sic] worth of garbage set out and still park our cars. It was funny that, as I passed through Rittenhouse and other neighborhoods that are wealthier, their garbage had been picked up each week. I guess my tax dollars are not as good as theirs. “

Roxborough, zip code 19128, had a high number of responses too, with many of the residents (84.6%) pleased with the snow removal in their areas. About half the respondents were also satisfied with the trash collection in their neighborhood this year, one testified to this saying “Considering everything that they were up against this year, I have been quite pleased overall. The only thing that bothers me is when they combine the trash with the recycled items.” Another mentioned, “They did a good job on my street, no problems, plus the guys are courteous with moving traffic along.” A respondent also said “Considering the pandemic and all the other problems in the city this year, I think trash collection and snow removal went quite well. Last year we didn’t really have any snow. Recycling has become a problem because there is no longer a market for anything but aluminum cans.”

19.5% of the survey responses came from zip codes including the top affluent neighborhoods such as Society Hill, Old City, Spring Garden, Queen Village, Manayunk, Roxborough, Somerton, and Torresdale. Over half of these communities were satisfied with both trash collection and snow removal. For both trash collection and snow removal, the most satisfied residents were in Roxborough, which consisted of almost 30% of these affluent areas, and Torresdale, which took 20%. However, in crowded areas more central to the city such as Society Hill, Old City, and Queen Village, some voices expressed disappointment with trash collection, pointing out that it also took weeks for it to be collected, or that workers were spilling trash behind.

Also, something interesting to take into consideration is Philadelphia’s gentrified areas. Those neighborhoods have experienced improvements, as more educated and higher-earning residents moved in over the years. The two areas ranking in the nation’s top ten most gentrified over the past two decades were Northern Liberties and Graduate Hospital/ Point Breeze. In NoLibs, both snow and trash collection have worsened this year, especially trash. In general, GHo/Point Breeze residents were more satisfied, although one resident pointed out, “The sanitation department needs a major boost in funding! A third crew is needed solely dedicated to driving around picking up all the dumping around the city. Point Breeze and Greys Ferry look like a dump to the point I don’t invite my parents over.” In regards to trash, the delays in the pickup have been the greatest complaint from Philadelphians, ranging from a few days, to in the worst case, three or four weeks. This poses health issues, as well as risks of insect and rodent infestation, especially during the warmer months. Philadelphia residents were frustrated that sanitation workers place trash and recycling together, despite efforts in separating them. “I spend time and energy to recycle and to clean the bottles and cans,”  stated an exasperated resident, “I understand the problems that the pandemic has caused. But there should be other alternatives, including hiring private trash and recycling companies.” Other dissatisfied comments indicated sanitation workers doing a sloppy job, not putting back trash cans at respective properties, and leaving trash spilled on the streets.

Complaints about the snow collection included a lack of salted areas, and snow getting piled against cars when it is plowed, forcing residents to shovel their way in. One Philadelphian noted that “the lack of snow removal can be hazardous to the elderly health and can cause damage to property owners (i.e car accidents for people who live on narrow streets).” Delays in snow collection also pose a problem for healthcare workers who need to commute and people with health issues who need to go to the hospital for mandatory care.

Despite the noted negatives, there were positive comments regarding the trash and snow collection as well. One response appreciated the city’s use of social media to update residents. Although it would not make up for neglected trash or poor performance, people using this resource are notified if there is a delay or change of schedule.

Many Philadelphians understood the setbacks due to COVID, and have expressed gratitude for the snow and sanitation workers for their efforts in spite of the pandemic. One resident stated, “Those folks were out doing a difficult job, working long hours when we didn’t know how the virus was spreading. Many of their co-workers were out sick and people were home generating more trash. I’m impressed with them!” 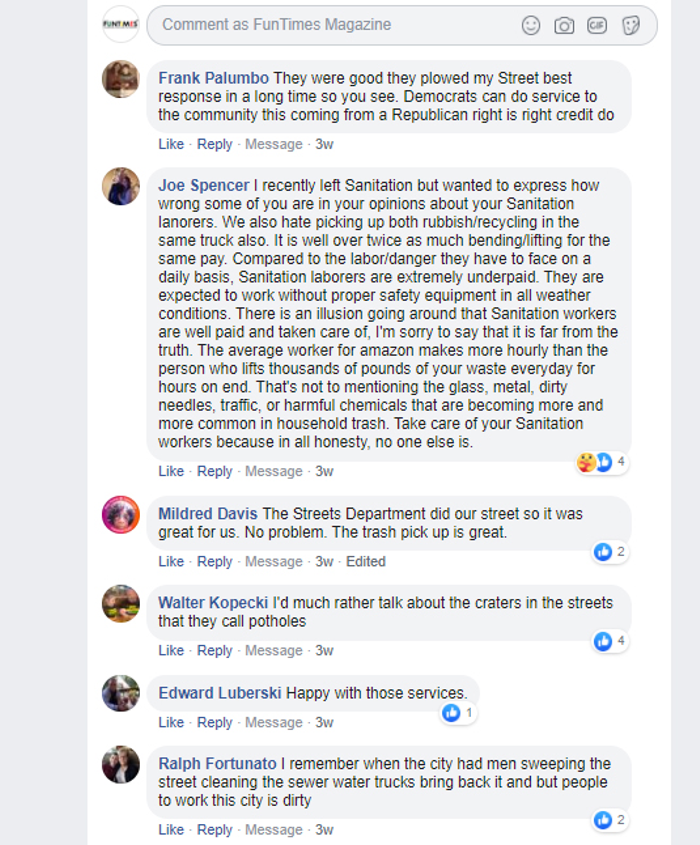 What Can The City Do?

Some suggestions from responding Philadelphians included increasing funding for sanitation, hiring more sanitation and snow removal employees, or alternately, outsourcing labor from private companies. One resident expressed support for the workers and pointed out how the city could improve the situation: “I know the men and women. [They] are doing the best they can do.  [The] city needs better equipment. Stop blaming workers, and stop overworking [sic] workers. Pay them on time and in full. Give them better protective gear.”

What Can the Community Do?

Philadelphia Streets Department is responsible for the trash collection in the city. However, it is also important for citizens to properly follow trash disposal guidelines and recycling guidelines in the first place. Otherwise, it poses difficulty for the sanitation workers to perform their proper duties. One resident pointed out that although there was still trash on the street, the community’s disregard for proper trash disposal rules is also to blame. They commented that they “feel for workers but the public was nasty and dirtier. [The public] didn’t [sic] follow recycle rules of tie cardboard or tree limbs and a bunch of little bags thrown out instead of 2-3 large bags. Most of the residents living on blocks were just too dirty/messy.” Another resident noted, “If your neighbors don’t comply and put out the trash in a timely manner, or put the trash out after the pickup, then you will have a week or so of your street smelling like trash! We can all help keep our blocks [sic] neighborhood & city clean by doing our due diligence & part!” Alternately, another resident shared that they often utilize the city’s citizen drop-off sites when the trash is not collected.

Let’s work together to assist our city sanitation workers in keeping Philadelphia beautiful, sanitary, and safe for all Philadelphians.

FunTimes Magazine is available to engage with institutions/nonprofits that are ready to creatively address Philadelphia trash challenges. Connect with us at [email protected]. Alissa Yamazaki is a web developer who helped launch FunTimes Magazine from print to online publication. Having a background in Medicine (University of Debrecen in Hungary) and Human Biology (BA, Brown University), she is thrilled to contribute her skills in research and analytical writing to bring you this article. Obianuju Nwagu is a data analyst and content creator at FunTimes Magazine. She has a Master's degree in Human Nutrition from the University of Ibadan, Nigeria. For leisure she follows her passion for music. You can connect with her on Instagram @juby_lindas. Kaila Snyder is a writer, content creator, social media strategist, and storyteller. She graduated with a BA in Creative Writing and a BA in Broadcasting from Susquehanna University. She is currently pursuing her MFA from Drexel University. Kaila lives and creates in Philadelphia, PA. She proudly serves as Head Copywriter/Social Media Manager for FunTimes Magazine.