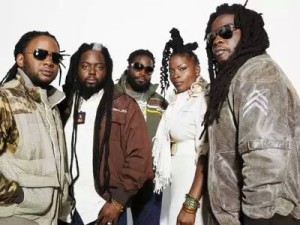 At the 58th Grammy awards, first-time nominee Jamaica's Morgan Heritage won the Best Reggae Album with their Strickly Roots. The album had topped the Billboard Reggae Album Chart when it was released last April. Jah Cure's The Cure, Barrington Levy's Acousticalevy, Luciano's Zion Awake, and Rocky Dawuni's Branches of The Same Tree were also vying for the same award.

"We are extremely proud," said Lisa Hanna, then Jamaican Minister of Youth and Culture. She added that this win comes as the ministry is requesting that reggae be inscribed on the United Nations Educational Scientific and Cultural Organization's representative list of Intangible Cultural Heritages of Humanity. The Morgan Heritage Band was formed in 1994 by five children of reggae artist Denroy Morgan, namely Peter "Peeta" Morgan, Una Morgan, Roy "Gramps" Morgan, Nakhamyah "Lukes" Morgan and Memmalatel "Mr. Mojo" Morgan. This marks their first nomination and first Grammy after 20 years in the music business. Rocky Dawuni lost on his bid to become the first African to win the Best Reggae Album. He made history as the first Ghanaian to be nominated for a Grammy. The video (see on youtube) of the song Nairobi, from Dawuni's acclaimed 2015 album, was filmed in Kenya's capitol as an ode to "this beautiful city in the sun" and a plea for peace and celebration of shared destiny. The video captures a picturesque portrait of iconic and historic monuments of Nairobi as it explores the everyday life of the city.

Dawuni serves as a traveling minstrel. His signature "Afro Roots" sound is a mixture of Reggae, Afrobeat, Highlife and soul music.This also marks the first nomination for Jah Cure, and Barrington Levy. However, a lot of reggae fans were expecting Jah Cure to take home the coveted award for his latest body of work released in July 2015. The album returned to the number one spot on Billboard Reggae Album charts following the announcement of his Grammy nomination in December of 2015, 26 weeks after the album made its debut at #1.

Stephen Marley holds the record for the most wins in this category, with six wins total (three times as a member of the band Ziggy Marley and the Melody Makers). Similarly, Ziggy Marley has been presented the award four times total, three times as the leader of his eponymous band. Bunny Wailer has received the award three times, and two-time recipients include Burning Spear, Damian Marley, and Shabba Ranks.